Even the most mundane of meals can be turned into something that little bit extra special thanks to the sprinkling of the right spice or spices. Ever since exotic spices reached our somewhat dreary and rainy shores, we have all been fans, adding them with abandon to spice up everyday meals. And the great thing about spices is that there are loads of different ones to choose from! Fancy something hot that makes you sweat? Easy, add some spice. Or what about wanting a pastry that has something a little bit fragrant about it; again it’s simple, add some spice.It is true that you can add spice to any meal to make it that little bit more interesting, and that both sweet and savoury dishes can hugely benefit from the addition of the right spice. We’ve all heard of pepper with strawberries, and it is true that sometimes the strangest combinations can work. Read on to find out some facts about some of our favourite spices.

Paprika is an intriguing spice that is unfortunately often overlooked aside from its powerful colouring abilities. It is actually made from the air dried fruits of the largest and sweetest varieties of the bell pepper and is then sometimes mixed with cayenne pepper or chilli powder in order to give it a more pungent kick. This spice originates from Mexico from whence it was exported from the 16th Century onwards by the Spanish to the Old World. Paprika also features heavily in Hungarian cooking, being one of the principal ingredients in one of the nation’s most popular dishes, goulash. While often used simply as a way to give a dish a gorgeous red-orange colour, it is true that the sweet spicy tanginess of paprika is absolutely delicious. If you are a newbie to paprika, then try it out lightly sprinkled over poached eggs on toast, or in a bowl of warming vegetable soup.

For a spice that you will find in both savoury and sweet dishes, then cardamom is the spice for you. Originating from India and nowadays produced in neighbouring Nepal, Bhutan and Indonesia as well as Guatemala which has become the world’s largest producer, this fragrant spice can easily give a burst of flavour to a dish. Made from the crushed up seeds of several native plants, cardamom is actually the world’s 3rd most expensive spice behind saffron and vanilla. It is predominately used in Indian cooking, as well as in Scandinavian baking particularly from Finland and Sweden where it is used in a variety of sweet breads. 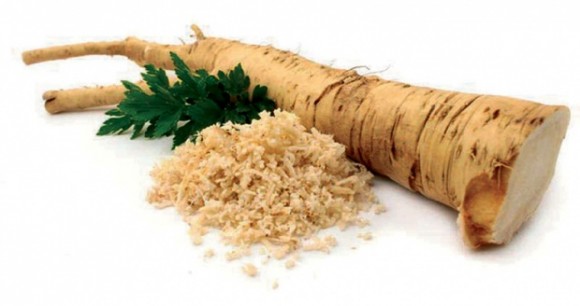 This potent little spice is typically found in sauce form and is the perfect accompaniment to beef dishes. Native to Eastern Europe and western Asia, but now naturalised throughout the world, horseradish is made from the roots of the horseradish plant which is part of the same family as cabbage, mustard and broccoli. The large white roots are ground up and pickled immediately in order to preserve the pungent flavour that we all know and love.